Back in ’06 I was talking to my brother and he mentioned he wanted a mural in his kids bedroom. I’ve always been artistic and pretty good at drawing (not to brag but in 5th grade I did win the Heritage Days drawing competition with my kick ass rendering of this train) so without hesitation I let him know I could definitely make that happen for him. He flew me out to Calgary and I somehow made it work with a regular paint brush and house paint. About a year later I picked up a cheap, shitty airbrush and did three more murals for my nieces and nephew in their new home. Beauty & The Beast , Tinkerbell and Spiderman.

Those were my first airbrushed murals and they looked pretty awesome. The kids loved them and I was super impressed with the way it turned out. I knew there was only one thing I could do now – put down my airbrush and not think about painting again for 6 and a half years. Life happened. I traveled. I lived in Thailand, the Philippines, Bali and Cambodia. I traveled to Australia and Europe, Mexico and all over the states. I started my own renovations company and didn’t really think about paint unless I was showing swatches to a client during their renovation.

I eventually moved back to BC and into a new place with a spare bedroom and thought it would be great space to start painting again. I picked up my old airbrush and 48 hours later Ironman was born. I ended up gifting that canvas to a friends boy and then sat on my ass for another 9 months. Sure I loved to paint but you can’t pay the bills with cartoon characters on walls… 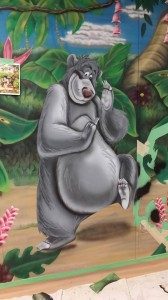 The Summer of 2013 a girl I was dating at the time was looking through photos of various artworks I had created and suggested I donate a mural to an orphanage or Children’s Hospital and share my gift with kids who could use the lift. I loved the idea and started asking around and making phone calls trying to secure some wall space. It was through a random run-in with an old high school friend that I finally connected to Sunny Hill Health Centre in East Vancouver. They were happy to have me paint a wall in their treatment centre where 90 feet of long, gloomy hallway used to greet the kids waiting for evaluations.

From the end of November 2013 to mid February 2014, I spent every weekend at that Hospital airbrushing a mural I hoped the kids would enjoy. I went out and bought a Go-pro to document the entire journey. After 180 hours or so of airbrushing I was finally finished. I posted the time lapse video on YouTube and in less than a week it had over 3000 views! People were coming out of the woodwork congratulating me and sharing their stories on Sunny Hill and how happy they were to know the mural was there. People kept wanting to know the same question: what was next?!?

So what was next?

Do I paint another mural for another group of kids to enjoy? Do I do something completely different? Do I get my weekends back and not think about paint for awhile? I decided to rent a studio space (I can call a friend’s garage that right?) and decided to immerse myself in creating art. I went down to LA and picked up some proper airbrushes and learned how to take my work to the next level. I started a Facebook Page and asked for suggestions on what to create next.

Messages came flooding in and I suddenly had hundreds of projects to choose from. Stories that pulled on the heartstrings, stories from friends, family and complete strangers. I wanted to create for these people and be a part of their story. I wanted to invite them into my life the way they were inviting me into theirs…. and so became the webisode series: Brush Strokes with Travis Vagner.